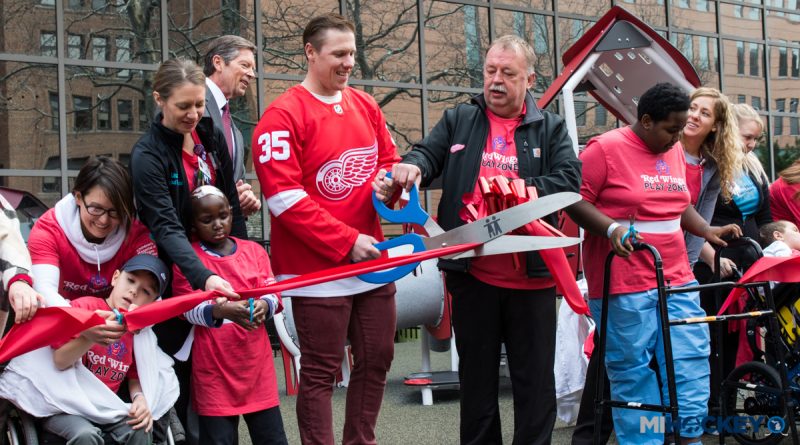 DETROIT – Though the Detroit Red Wings’ season ended earlier than it had hoped, it’s not stopping the team from making an impact off the ice.

“Being a parent myself, I couldn’t imagine being one of these parents going through this, so to be able to come down here and help celebrate this new play structure thanks to our fans and our great organization, it’s a huge honor for me,” Howard said.

“For these kids, they go through so much and they’re so strong. For them to come out here and have a little bit of normalcy and just be kids, it’s huge for them.”

Located at the southwest corner of the Detroit hospital, the outdoor play area was constructed to provide a safe and fun area for the hospital’s patients and their families, featuring a custom 8-foot-tall by 10-foot-wide Al the Octopus sensory structure. Some of the other highlights include: a SmartPlay tree house with a slide, a Cozy Dome quiet space and rubber safety surfacing branded with the Wings’ logo.

The Red Wings Play Zone is also ADA-accessible and will offer an outdoor setting for patients’ rehabilitation programs.

Since 1995, the Red Wings Wish Club has raised more than $400,000 for the Children’s Hospital of Michigan Foundation.