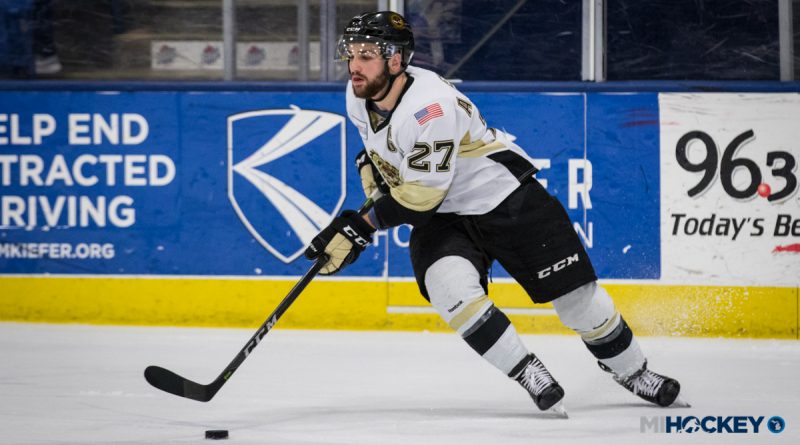 It certainly wasn’t the result they were looking for.

After taking an early series lead in a best-of-three first-round playoff match-up against Chicago, the Muskegon Lumberjacks found themselves in a winner-take-all showdown at home yesterday.

The Jacks held a 3-2 lead in the third period against the Steel before Chicago’s Blake McLaughlin scored the game-tying mark at the 15:54 mark.

Then, Aaro Vidgren’s shot found its way through Muskegon goaltender Keegan Karki at the 4:37 mark of the first overtime period, giving Chicago a Game 3 win and a series victory.

It was the first time in USHL history that a team rallied from a 1-0 series deficit to win a best-of-three first-round series.

USHL scoring leader Marc Del Gaizo scored two goals and added an assist in the quest to extend the Jacks’ season, while Vincent de Mey scored twice in the third. Karki made 35 saves.

In the end, however, it was the reigning Clark Cup champions extending their season.

Here was the game-winning goal:

Chicago moves on to a date with USA Hockey’s National Team Development Program; that series begins Saturday night in Plymouth.

Del Gaizo finished with four points in three games to lead the Jacks in scoring in the postseason. Wyatt Bongiovanni, Vincent de Mey and Jachym Kondelik were all tied for second with three points apiece.

The Lumberjacks will now prepare for the 2018-19 season with the upcoming USHL Draft, which will take place May 7-8. Muskegon will not have a first-round pick in the Phase 1 Draft the first night, after the team used a USHL tender on Alex Gaffney of West Orange, N.J. Gaffney, fresh off a 70-point season in 47 games with the North Jersey Avalanche 16U team, is a Harvard verbal commit.