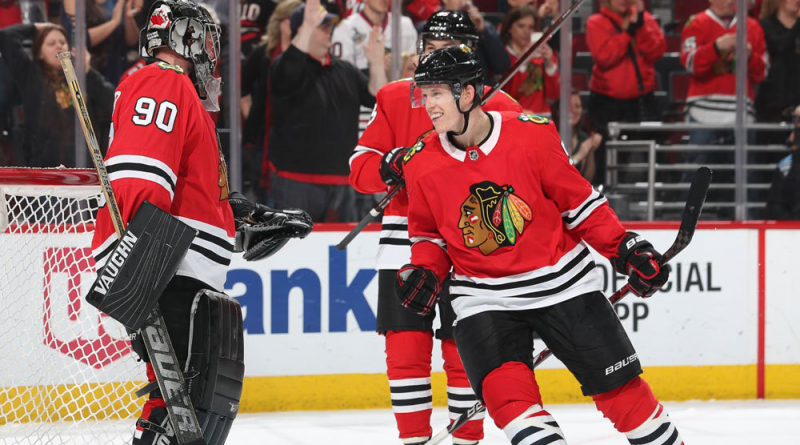 Photo from the Blackhawks' Twitter account
Editor's picks For Coaches For Fans For Parents For Players Pro The Latest
March 30, 2018March 30, 2018 MiHockey Staff

From beer leagues to the big leagues.

It was like something out of a Hollywood movie for 36-year-old Scott Foster, who earlier in the day was working his day job as an accountant.

In Thursday night’s game against Winnipeg, Chicago Blackhawks netminder Anton Forsberg was injured during warmups, which forced 23-year-old Collin Delia into his first NHL start. But after Delia went down at 5:59 of the third period, that left the Blackhawks with no goaltender.

The Western Michigan alum last played college hockey over a decade ago, but was on-hand as an emergency backup. He stepped into the Chicago net, wearing his WMU mask, and turned away all seven shots he faced. Certainly a moment he’ll never forget, he was also named the game’s first star. The Blackhawks players also had fun with it and awarded Foster the team’s player-of-the-game belt.

Foster told reporters after the game, “I’m an accountant by day. So a few hours ago I was sitting on my computer typing on the 10-key, and now I’m standing in front of you guys, just finished 14 and a half minutes of NHL hockey.”

During his time at WMU from 2002-06, Foster recorded a 20-22-6 record with an .875 save percentage and 3.44 GAA. Before that, the Sarnia, Ontario, native played for the Petrolia Jets of the Western Ontario Hockey League. Foster joins Glenn Healy as the second Western Michigan goaltender to play in a NHL game.

Foster’s biggest save of the night:

Foster with what has to be one of the best post-game interviews of all-time:

Hilarious post-game interview from 36-year-old Scott Foster, who was called into action as the Blackhawks Emergency Backup Goaltender tonight pic.twitter.com/p4ExOQz8oA

Tonight’s belt winner… who else?