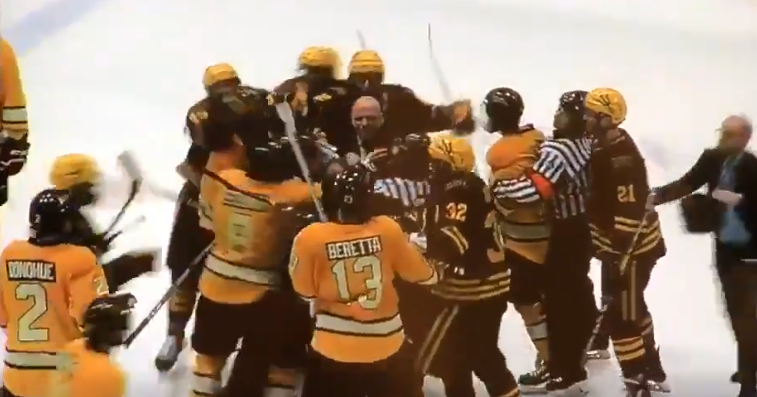 Saturday night saw Michigan Tech and Arizona State battle it out in Houghton to a 5-3 decision for the Huskies.

But it’s what happened after the game that’s generating buzz.

Officials needed to separate both ASU head coach Greg Powers and MTU coach Joe Shawhan after the two began shoving each other at center ice, sparking a brawl between both teams.

Anyone looking for footage of the fight here is part of it.

ASU coach Greg Powers said Tech coach Joe Shawhan was “bush league” and his behavior was “unacceptable.” Shawhan said he was just trying to go talk to the opposing coaching staff with no bad intentions. pic.twitter.com/sFE5IorEGJ

I’ve never seen anything like this before at a hockey game. It was chippy all night between Tech and Arizona State and it boiled over st the end with the coaches going after each other before the players got involved. Crazy! pic.twitter.com/0rY7u9tGT7

On Monday, the MTU head coach released the following statement:

“What happened after Saturday night’s hockey game is something I’m not proud of as the head coach of this historic program. I’m sorry for my involvement and know that it is not acceptable for Michigan Tech or the WCHA.

“Situations like that should never happen, especially with all the young faces in the arena who look up to our team and dream of being Huskies some day. We pride ourselves in having one of the best game day environments in all of college hockey and incidents like that should not be memories for our great fans.

“My team prides itself on sportsmanship win or lose. I thought our players did a great job trying to deescalate the situation, and I’m proud of them for that. They know how important it is to be leaders in this community.

“I thank our fans for the continued support of this team as we look to finish the season on a high note. Go Huskies!”