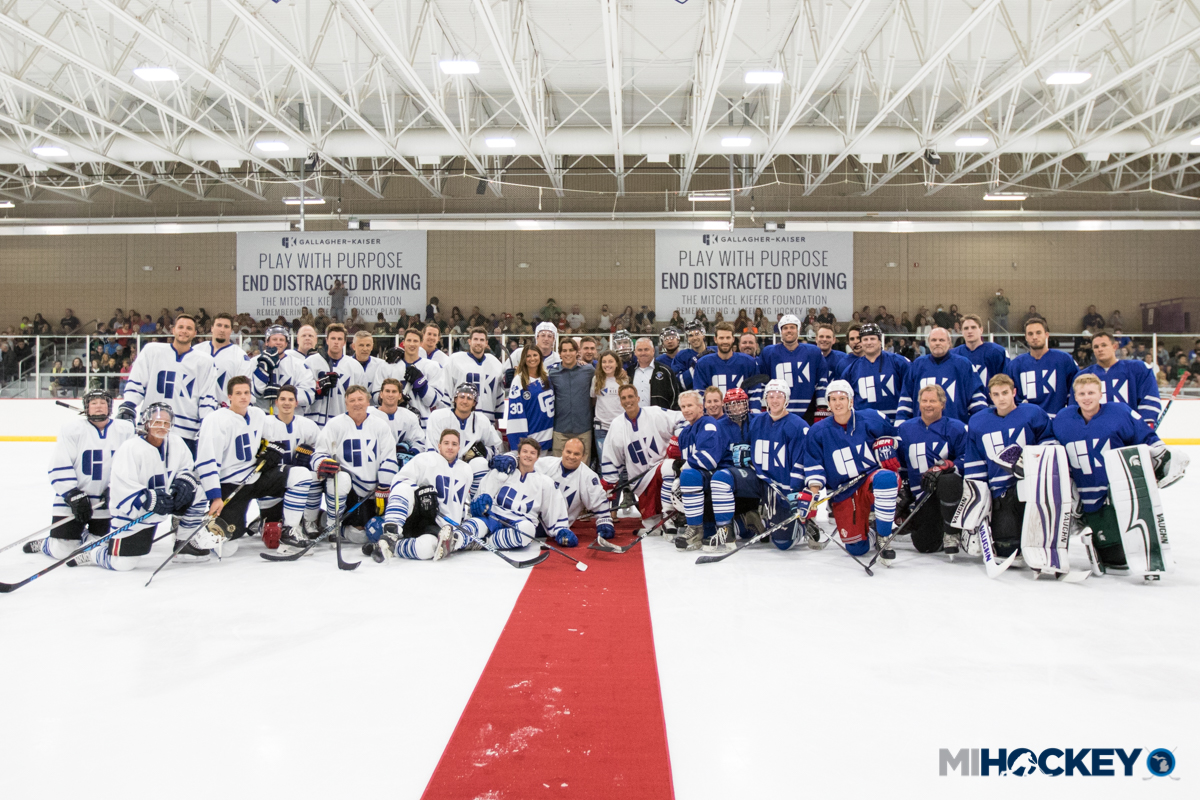 In need of another goaltender, Mitchel Kiefer took part, joining some of his friends on the ice.

It would be the last game that the former Detroit Catholic Central goaltender played in; Kiefer was killed in a car accident on his way to Michigan State on Sept. 19, 2016.

To remember Mitchel and to help the Kiefer family’s new mission to fight distracted driving through the Mitchel Kiefer Foundation, Gallagher-Kaiser turned this year’s Aug. 11 skate at the Troy Sports Center into a remarkable event.

Bob Kaiser, owner of the industrial equipment supply company based out of Troy and father of Muskegon Lumberjacks forward Bobby Kaiser, put his hockey dad connections to work, as did his interns and employees. The result was a game with a star-studded roster featuring the likes of Chris Chelios, Igor Larionov, Tie Domi, Zach Werenski, Boone Jenner and Steven Oleksy.

The game drew a crowd, which was the hope for the Mitchel Kiefer Foundation and its supporters.

“We’re having this game to really draw awareness to the dangers of distracted driving and try to get people to change behavior and stop texting and driving and pay attention to the road,” said Steven Kiefer, Mitchel’s father. “Mitchel played in this very game a year ago and Mitchel was an honorary goalie for the Gallagher-Kaiser intern team that played last year. Bob needed an extra goalie so Mitchel came out and played goal, did a great job and it was the last hockey game that he played.

“It was right here, so I was just so moved when Bob and the Gallagher-Kaiser team agreed to dedicate this game to Mitchel this year.”

Kaiser, whose son is committed to UMass, said he wants the hockey community – a group that does more than its fair share of driving during the season – to take note of the Mitchel Kiefer Foundation message.

“Last year, we had an intern game, they played the employees and it was nice, everybody had a lot of fun,” he said. “Because of the circumstance with Mitchel, we thought it’d be a good idea to turn it into an annual event for the Mitchel Kiefer Foundation and try to bring some NHL players. We have 11 or 12 NHLers and then eight or 10 D1 hockey players, including my son and his friends from the USHL. And then we have the four or five guys from each team that happen to be on the ice with these great players.

“We want to turn it into an awareness of distracted driving. I’m involved with the foundation; I want to continue to support the Mitchel Kiefer Foundation…we have so many hockey players that travel the United States and travel every weekend, we have 650,000 USA Hockey members and we want to bring awareness to all those people and their parents not to text and drive.”

Grosse Pointe native CJ Kusch was one of the Gallagher-Kaiser interns organizing the event. A Grosse Pointe North, Oakland Jr. Grizzlies and junior hockey player himself, it wasn’t difficult to round up some of his buddies to take part in the contest – including one of his best friends in Werenski.

“To be a part of this event was very special for myself,” he said. “Being able to honor Mitchel’s life and to see the smiles on the faces of his family was a true honor. Not to mention being back on the ice with my best friends and childhood idols…it doesn’t get much better than that.”

The rosters were impressive, to say the least. Here are just some of the names who showed up at Troy to support the Mitchel Kiefer Foundation:

“It’s just fantastic,” Steven Kiefer said. “It’s humbling, we’re so grateful that these guys would give their time to help this cause. This is a cause we don’t need to raise a lot of money. What we need to do is raise a lot of awareness and when guys like that come out, all the kids come out, all the fans come out and we can spread this message so that we can start changing behavior.”

For more information about the Mitchel Kiefer Foundation, visit MKiefer.org.