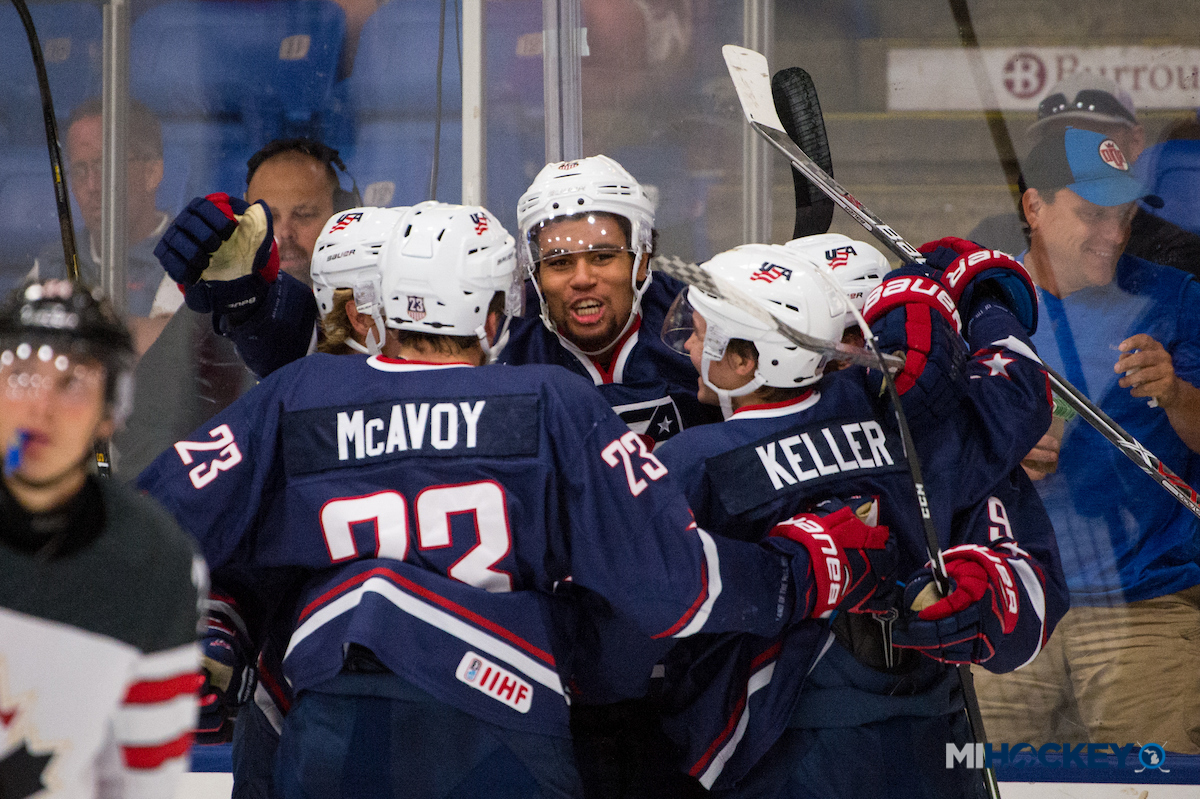 PLYMOUTH – The National Junior Evaluation Camp came to a close Saturday evening in Plymouth, with USA Hockey saving the best match-up for last.

Team USA squared off with rival Canada in the tournament finale, and the host country entertained a crowded USA Hockey Arena with a 5-1 victory.

Jack Roslovic, Jordan Greenway, Logan Brown, Clayton Keller and Brock Boeser all scored for the Red, White and Blue, while Chesterfield native Tyler Parsons tended to the U.S. goal and turned aside 35 of 36 shots.

An announced crowd of 2,079 made the first USA vs. Canada game at USA Hockey Arena an exciting experience for all.

“It was great,” said Team USA coach Bob Motzko, the man tabbed to lead the U.S. at the upcoming World Junior tournament. “There was a little buzz in the building – everybody knew it. I’m sure USA Hockey is going to tell you that it was outstanding. First year, having an event like this – to have that type of atmosphere – I thought it was outstanding.“

With the victory Saturday evening, Team USA finishes the NJEC with a 2-1 record after the roster consolidation on Tuesday – wins over Canada and Sweden and a lone 2-1 loss to Finland.

For USA Hockey’s Jim Johannson, the first-time camp at USA Hockey Arena was successful both for the country’s junior program, and for USAH’s new facility.

“I think, two-fold, obviously it being in Plymouth here, and our interest here, I thought it went really well,” said Johannson, USA Hockey’s assistant executive director of hockey operations and World Junior team general manager. “I’m happy with all the facilities, arena people, and the excitement that came into here. Speaking for the other teams, I think it went well – from what I know so far. Again, I think junior camps are always for all of us about evaluation and getting our players in as many situations as we can and I think the schedule and the competition did that for us.”

Parsons was one of the stars of the night in the finale, allowing only one goal to the Canadian squad. The Chesterfield native and Calgary Flames draftee – fresh off a Memorial Cup championship with his London Knights – stopped 22 shots in the first period to keep Team USA in a position for victory on home ice.

“I went in there and I stuck to my game plan,” Parsons said. “That’s how I go into the games, and playing in London, last season there were various different types of games I was in, and it was one of those nights where you see a lot of shots in the first, and you have to be ready for it as a goalie. If you’re not ready for it, you’ll get yanked. I just went in there and played my game, played hockey, and gave my team a chance to win.”

Canada, which showed up halfway through the NJEC, finished with a 0-3 record. They were out-scored 13-3 in the three games.

“Tonight, we dodged a bullet in the first period, and our goalie was outstanding,” Motzko said. “They poured it on us – we made plays, though. Then we make one on a power play. That’s hockey. Then we hunkered down for two periods and played much better. It was fast. We weren’t ready for the pace right out of the box – that’s hockey. We adjusted. It was an excellent game.”

Despite it being an exhibition contest, the U.S. vs. Canada game lived up to the summer-hockey hype. Roslovic’s early goal – just 2:19 into the first period – energized a chilly USA Hockey Arena, and the fans were treated to a series of after-the-whistle pushing and shoving matches throughout the contest.

The biggest ‘disagreement’ of the bunch came after Charlie McAvoy flattened Lawson Crouse with 5:30 remaining in the third period – just moments after Canada finally found the scoresheet. Following the collision, a crowd formed at the Team USA blue line, and the pushes and facewashes led the two parties into a scuffle in front of the Americans’ bench.

The game ended in a traditional handshake, however, and members of the two teams exchanged words and hugs on and off the ice afterwards – a reminder of how the two national programs may be rivals, but friends at the same time.