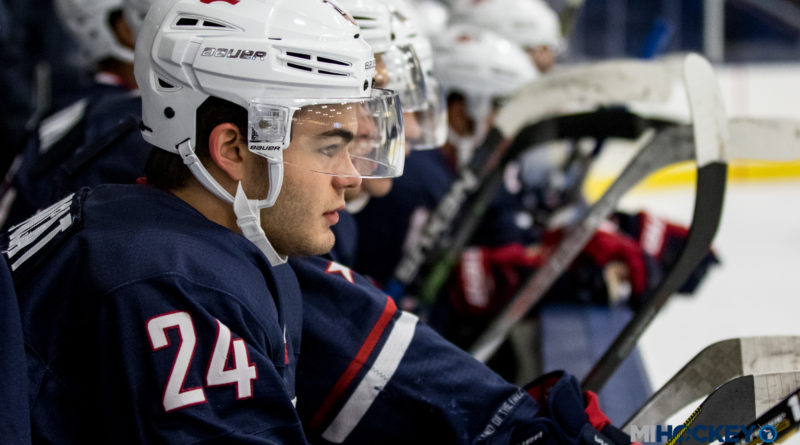 The best in the world were on-hand at USA Hockey Arena in Plymouth for the U.S. National Junior Evaluation Camp last week.

But with that now in the books and the impressions made on the U.S. staff, what’s next?

“Discussions and a little bit of feedback, kind of talk amongst ourselves and the coaches and probably some feedback from the players and really get everyone settled in,” GM of the U.S. National Junior Team Jim Johannson said. “There’s almost a little lull right now for hockey, with some guys going to summer camps with every one of their teams, so we’ll let that settle down a little bit and go through what happened here a little bit and then get more feedback from the coaches on that.”

While the U.S. began the camp split into two teams, cuts were made halfway through the week to form a singular U.S. squad. The U.S. then went on to defeat Sweden, 4-3, fall to Finland, 2-1, and top Canada in the camp finale, 5-1, as they rotated players into each line-up.

For those who were sent home early, however, the man who will be coaching the team come December said it’s not necessarily the end for them, despite a strong showing from the team in place that competed.

“This is a big, big part of the process. You can’t hide from it,” World Junior team bench boss Bob Motzko said. “But this is summer hockey. We have to remember that. We have to stay true in what we tell our guys. Some guys might not have had a good week in the middle of the summer. We have to honor that. Our people will be out October, November, December to make sure we make the right decisions. This week, excellent week, first and foremost. I mean it. Quality, quality young men who really appear to be here for the team, not individual stuff, and that, to me, is the greatest part.”

So who impressed Motzko most?

“I think Tage Thompson has made big jumps as a player, and I think he showed it. Whether he was scoring goals or not, he played a real good hockey game [against Canada]. He played the kind of hockey that the World Juniors is and didn’t score on the scoresheet, so it’s more than whether they’re scoring or not. I thought Charlie McAvoy showed he’s a pretty special player in all aspects of the game, and certainly Tyler Parsons (Chesterfield) showed what he did last year and backed it up on the ice [against Canada].”

Motzko added that he was unfamiliar with Parsons heading into camp, but was certainly impressed leaving it.

“First time I’ve seen him play. He stopped the puck a lot, very athletic. I know I told him two nights ago that he had this game and he had a twinkle in his eye. He wanted it, and he backed it up.”

While Parsons and the rest of the players will head off to their respective junior and college teams to begin their 2016-17 campaigns, Johannson said that the most important factor going into the decision-making is simply if they’re healthy or not.

“Obviously there’s a lot of hockey between now and then so balancing how many guys stay healthy and where they’re at,” Johannson said. “We tell our players, they all have a certain body of work, some bigger than others and this camp was a body of work for guys, so we’ll evaluate them throughout the fall and stay in contact with them, but you really balance it all as best as you can. Again, first and foremost, they’ve gotta be healthy before we even start talking about them.”