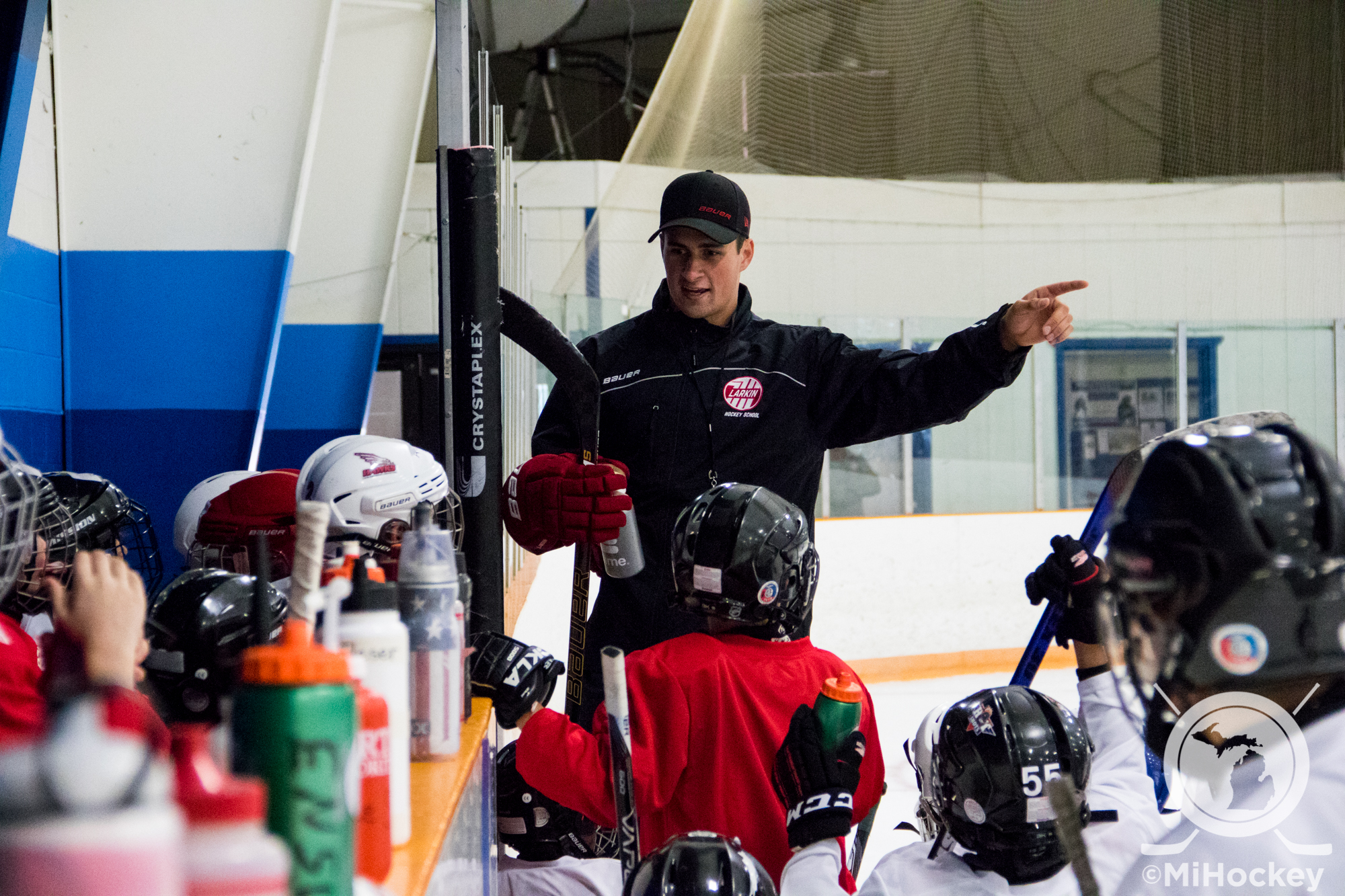 WATERFORD – They arrived at Lakeland Arena bright and early Tuesday morning, ready for the first day at a new hockey school.

The difference for these lucky youth hockey players, however, was that their instructors would be a little bit closer in age than usual.

The inaugural Larkin Hockey School kicked off this week in Waterford, Mich., with the four Larkin boys – Colin, Adam, Dylan and Ryan – bringing their hockey expertise back to their hometown rink.

And while the hockey camp logos may pay homage to the one Larkin family member who currently plays for the Detroit Red Wings, the camp is a group effort for the cousins – with Adam leading the way.

The second oldest of the Larkin boys – brother to youngest Ryan and cousin to Colin and Dylan – will start his third season with Yale’s hockey team this fall. When you attend an Ivy League school, you are required to be ‘the brains of the operation,’ apparently.

“That’s what they tell me, anyways,” Adam told MiHockey during a break in the action Tuesday morning. “I’m the one of the four Larkins that goes to Yale, so they tell me I have to do all the figuring things out and I’ve been working a lot with [Lakeland Hockey director Brad Martin], so it’s been good. Obviously everybody has something to contribute – all the counselors we’ve brought in but also my cousins and my brother. It’s good.

“I’d like to think of myself as the brains of the operation, but at the same time, it’s a group effort.”

The main attraction, of course, is Dylan. It’s safe to assume that the 19-year-old sensation (he turns 20 on July 30) is the reason why there was a waiting list for the camp before it was even announced.

“It kind of started as talk,” Dylan said. “We know Brad Martin, who runs Lakeland Hockey Association, pretty well, and I think there was a little rumor around the rink. Before we even had the camp and the website set up, we had a waiting list. People wanted to sign up, so, it kind of started out with one week, then two weeks, now we’re into three weeks of kids. It’s come together pretty well, and it’s pretty cool to have this going on.”

All four of the Larkin boys are making the people around their hometown rink proud, however. While Dylan rushed through stops at USA Hockey’s National Team Development Program and the University of Michigan en route to an NHL career with the Red Wings, his brother and cousins are thriving, as well. Adam, as noted, is at Yale, while Colin is at UMass-Boston and Ryan is set to be a freshman goaltender at Miami (Ohio) in the fall.

“It was Dylan’s dad who years ago said, one day, all his nephews and kids would be playing college hockey, and everybody thought he was crazy,” Adam said. “It’s just exciting that it all worked out like that. We’re very fortunate and we’re excited. To think that I was ever going to be running a camp, it was pretty far-fetched, at least at one time, but it’s exciting.”

Martin is just glad to have some of his famous rink rats back at Lakeland.

“It’s just a great honor to have it here,” the Lakeland Hockey director said. “For them to give back to the area where they grew up, along with some of the other instructors here, we couldn’t have asked for anything better than to have them here at Lakeland.

“Lakeland’s an old rink, and to have kids that came through here – obviously it started with Pat LaFontaine, and then to have Dylan come through and all the Larkin boys with their career paths, and the other instructors, it’s huge. You couldn’t pay for the marketing to have these guys come out and give their time back here and have the notoriety for our rink. For an old rink like Lakeland, it’s great.”

While it’s a celebration for the Lakeland hockey community, there’s still hard work being put forth on the ice. The camp participants are put through on-ice skill and conditioning work, and they also go through off-ice workouts, as well. The Larkin boys ran a smooth operation during Day 1, putting the kids through a series of skill drills before breaking into station-based exercises.

“The boys put a lot of time into it,” Martin said. “They took it very seriously. One of the questions we had was, ‘Is this going to by Dylan Larkin showing up?’ or is it going to be a legitimate hockey school, and from December when we first started talking about it to now, I know they put a lot of time and effort into this.”

The player featured in the logo of the camp said he was pleased with the first day of camp.

The Red Wings budding star appeared to be the head instructor on the ice, and he enthusiastically engaged with camp participants throughout.

“I think anytime you get to go back, for myself, a rink like Lakeland where I grew up playing here and coming to camps like this, it’s pretty cool. These kids, they’re really respectful and they’re excited to be here. It’s been really cool so far.”