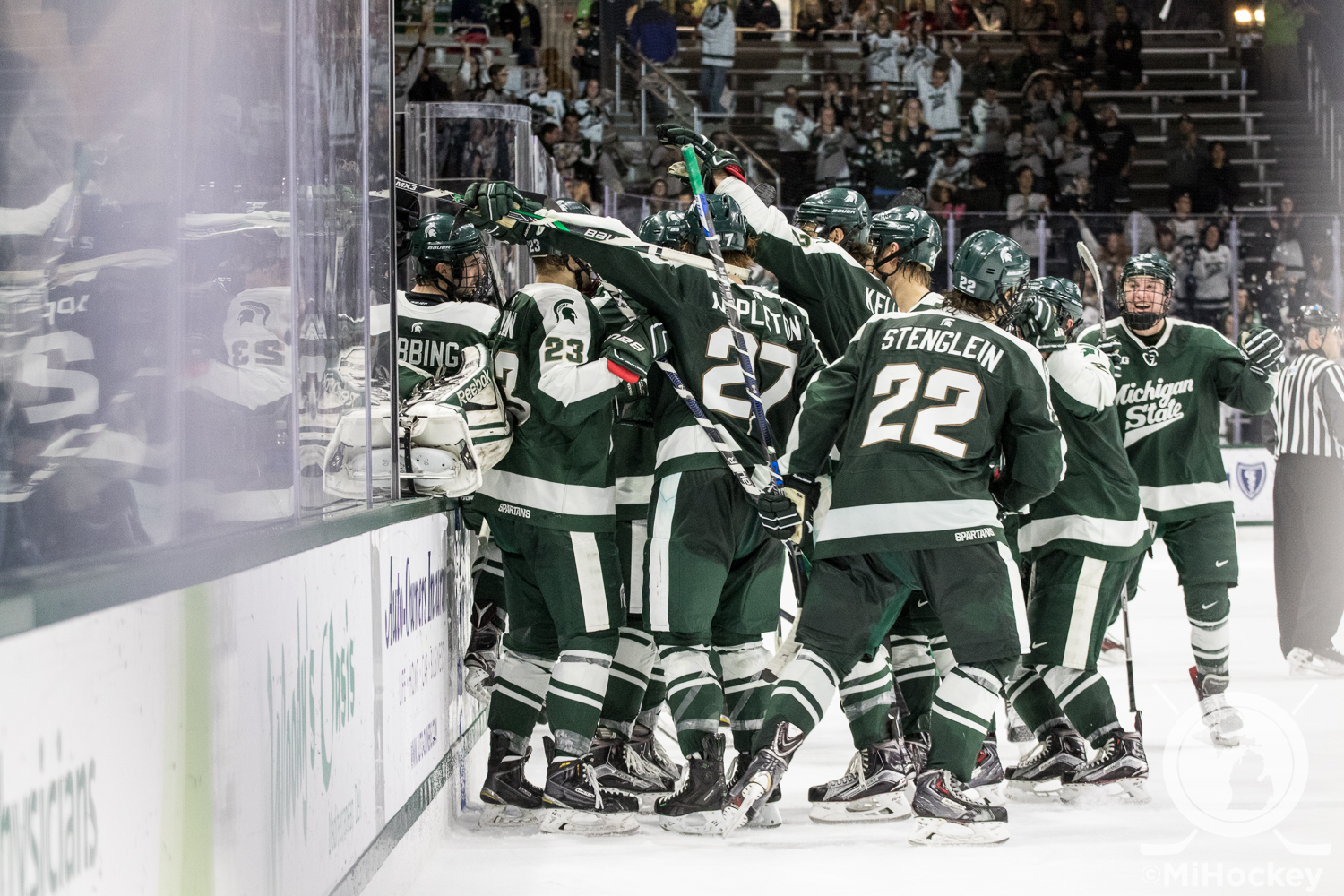 With five more players officially added to their list of commitments for next season, Michigan State is planning on bringing in 10 new players for the Spartans’ upcoming 2016-17 campaign.

“This is an excellent class comprised of players that have demonstrated a high level of performance and experience at the junior hockey level and we’re very excited for their arrival at Michigan State,” said head coach Tom Anastos. “All of these young men are diligent in the classroom and bring tremendous character and leadership to the Spartan hockey program.”

Scouting Report: Comes to MSU as one of the top ranked forwards in the world for the 2017 NHL Entry Draft … Highly skilled offensive player with elite hands and vision of the ice … Powerful skater and his high hockey IQ allows him to make plays that make other players better … Possess a skill set that makes him a very dangerous special teams player.

Scouting Report: Has become one of the hardest working, grittiest players in the USHL as his energy and compete level have set him apart from the average player … His tenacity around the net has lead him to become one of the league’s top goal-scorers … His grit, energy and willingness to play physical make him a tough player to play against.

Scouting Report: Joins the Spartans after two successful seasons in the BCHL … Smooth-skating in-your-face defender … His ability to go back for pucks, escape from forecheckers and move the puck quickly to forwards make him an effective player … Defensively his compete level and willingness to physically  engage opponents make him hard to play against in all three zones of the ice.

Chrcek (pronounced “check”) recently finished his second season with Salmon Arm, registering 21 points (5g, 16a) in 53 regular-season games … Added one assist in six playoff games … Recorded 11 points (1g, 10a) in his first season with Salmon Arm in 2014-15 … Teammate of fellow Spartan commit Taro Hirose … Played two seasons (2012-13 and 2013-14) with Honeybaked U18, recording 11 and 18 points, respectively … Played with Belle Tire prior to Honeybaked.

Scouting Report: A mobile, puck-moving defenseman that has been a mainstay for Springfield Blues for the last two seasons … His ability to shoot and see the ice have allowed him to develop into a power-play defenseman at the junior level … A 2014 graduate of Orchard Lake St. Mary’s that had an outstanding high school hockey career.

Recently completed his second season with the Springfield Jr. Blues where he was the club’s top scoring defenseman with 25 points (8g, 17a) and also the team leader in plus/minus at plus-10 … His three game-winning goals ranked second on the team … Selected to play in the 2016 NAHL Top Prospects tournament … Tallied 15 points (4g, 11a) in 49 games in his first season with Springfield in 2014-15 … Three-year letterwinner for Orchard Lake St. Mary’s from 2011-14, earning first-team All-State and all-league honors as a senior … Played his bantam hockey for Victory Honda.

In his first season with the New Jersey Titans where he is 17-12-1 and ranks 13th in the NAHL with a .917 save percentage … Owns a 2.63 goals-against average … Earned NAHL East Division Star of the Week honors twice during the month of February … Led Detroit Catholic Central to two consecutive state titles in 2014 and ’15 … Went 20-3-1 with a 1.42 goals-against average and .927 save percentage as a senior for DCC.

Recorded 13 points (5g, 8a) in 55 games with USHL’s Muskegon Lumberjacks this season … Led the team with 92 penalty minutes … Named to NHL Central Scouting’s Players to Watch List, a compilation of top prospects from all the major leagues throughout North America and Europe … Played in 58 games with the Lumberjacks in 2014-15 and helped the team reach the USHL’s Clark Cup final … Captained the USA U18 team at the 2015 Hlinka Memorial tournament … Spent time with the Honeybaked U16 and U18 teams, producing six points in 25 total games in 2013-14 … Also played for Honeybaked Bantam Minor and Major teams, totaling 23 points in two seasons … Son of former NHL goaltender Darren Eliot.

In his second season with the Youngstown Phantoms of the USHL where he has been limited to 19 games due to injury… Tallied five points in 39 games with Youngstown in 2014-15, helping the Phantoms finish with the best record in the USHL … Member of the USA’s 2015 Hlinka Memorial team, where he scored once … Also featured at the USA Hockey Selects U16 and U17 camps … Played for the St. Louis AAA Blues U16 program, adding seven points in 36 games in 2013-14.

The 19-year-old goalie finished his second season with the USHL’s Chicago Steel, posting a .912 save percentage and 2.75 goals-against average 31 games … Named the USHL Goaltender of the Week on Feb. 8 after posting a 47-save shutout in going 1-0-1 during the week … Played in 15 games last season with the Steel and had a 3.51 goals against average to go along with a .892 save percentage … Drafted No. 6 overall by the Steel in the 2014 USHL Entry Draft … Played two seasons at Farmington High School, his best coming in 2013-14, where he had a 1.99 GAA and .938 save percentage … Product of the Victory Honda AAA system.

Ranked 13th in the BCHL in points (71) and fourth in assists (56), both of which led the Salmon Arm Silverbacks … Appeared in all 58 games in his second season with Salmon Arm … Finished his first season with the Silverbacks in 2014-15 as nearly a point per game player, posting 50 points (18g, 32a) in 58 games … Made the jump to the BCHL after three seasons at the prestigious Edge School in Calgary, where he had 163 points in 109 games across various leagues … Product of the Calgary North Star Sabres AAA program … Had five points in five games at the 2010-11 Alberta Cup.

Ranks 10th in the USHL in goals with 29 and 14th in points with 52 to lead the Green Bay Gamblers this season  … Had a team-high five-game point streak earlier this season over which he scored six goals and added two assists … Totaled 33 points in his second USHL season last year, splitting time between Green Bay and the Sioux City Musketeers after being traded mid-season … Made his USHL debut in 2013-14, posting 12 points in 30 games … Captained his Chicago Mission U18 team in 2013-14 and finished as more than a point per game player … Also played for the Lake Forest Academy, CYA Bantam Major AAA, and Team Illinois growing up.