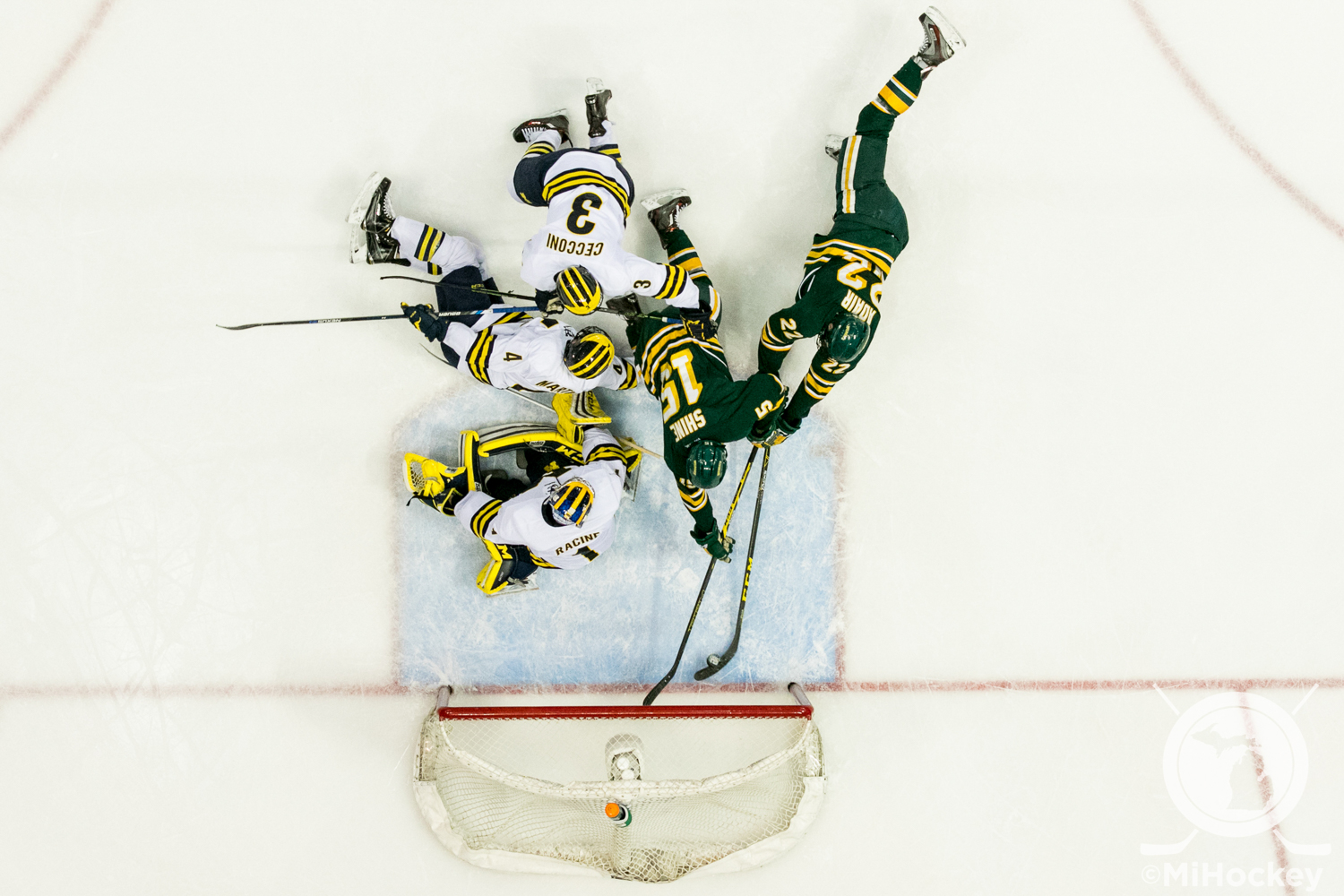 The freshman Connor posted a goal and two assists in the two games to give him 12 goals and 25 points in his first 17 collegiate games. Since the U.S. World Junior team was announced and Connor’s name was omitted, the Shelby Township native has posted six goals and three assists in his last four games.

“Kyle Connor, he comes into Michigan with high expectations,” Michigan head coach Red Berenson said of his tournament MVP. “He was a first-round draft (pick) by Winnipeg this summer and I think everyone thought he would be an impact player, and that’s hard to do when you’re a young kid, but he’s delivered that. I think there’s some people that think he should’ve been on the U.S. junior team, but definitely Kyle has made a statement here in recent weeks against Wisconsin, Minnesota and then this weekend, so good for him.”

“I think KC had a good two days here, even before this he was playing really well,” Compher said. “I think that our line has been clicking. The speed that we’ve been playing with that KC brings, Tyler brings, has helped us get chances, we’ve been good down low and these are two guys that know how to finish goals and it makes it really easy on me.”

Connor humbly credited his teammates for helping his own performance in the two-day tournament.

“Any time you win an award like that, it’s pretty special,” Connor said. “It’s just a testament to my teammates and the sacrifices they’ve made this whole two games and tournament to give me the opportunities to play well in this game.”

Auk, meanwhile, saw his Huskies come out on the losing end in that championship game, but he certainly did his part to help push for the win. The sophomore defenseman and St. Clair Shores native assisted on three of the seven Michigan Tech goals in the two-day span to give him ten points in 20 games on the season. He leads all MTU defensemen in both points and shots.

Despite it coming in a third-place game, Northern Michigan’s Payne said it was a special feeling scoring the game-winning overtime goal at Joe Louis Arena, especially in front of family and friends.

“Growing up, we always watched the GLI with family and now they get to come down here,” Payne said. “I think I had like 20 people here watching, so it was pretty good to see them and be able to score in front of them here. I got a bunch of texts right after the game, it was pretty cool.”

Shine also came up big for the Wildcats, having scored in each game, including the game-tying goal Wednesday against MSU with less than five minutes to play to force overtime. Like Payne, Shine also had a number of family and friends in attendance, especially meaningful to him considering his grandmother has been fighting cancer.

“It’s been kind of a rough year for my family,” Shine said. “My grandma has gone through cancer, so she’s here at the game and I saw her in warm-ups, so it gave me a little motivation. I was excited to play in front of her. She hadn’t seen me play in a while.”