Kalamazoo will be hosting quite the event in February.

The ECHL announced today that the Kalamazoo Wings will be hosting the 2016 CCM/ECHL Hockey Heritage Week (presented by PNC Bank and Bronson Hospital), for an event themed ‘past, present and future.’

“Hockey Heritage Week is the showcase event for the ECHL during the upcoming season,” ECHL Commissioner Brian McKenna said in a press release. “We are proud to bring the event and all the surrounding festivities to Kalamazoo and western Michigan. Given the hockey history and tradition that exists in the community, the location is a perfect match.” 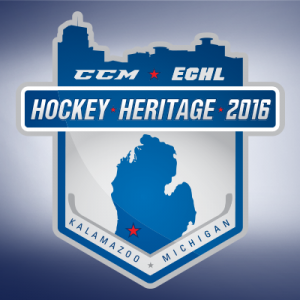 On Friday, Feb. 5, there will be exhibits from the Hockey Hall of Fame, alumni reunions, appearances by the ECHL Board of Governors, the 2016 ECHL Hall of Fame Luncheon and special throwback jerseys worn by the K-Wings and the Toledo Walleye in their 7 p.m. game.

“We’ve been a staple of the community for nearly a half-century,” K-Wings Director of Sales Toni Daniels said. “Moving forward, there’s certainly no signs of slowing down. The best is yet to come and we are honored to play host to this amazing event.”

The next day, the K-Wings and the Kalamazoo Optimist Hockey Association will work together for a youth hockey showcase in the morning and early afternoon. KOHA – who recently celebrated its 50th anniversary – is one of USA Hockey’s ‘Model Associations.’

“The Kalamazoo Optimist Hockey Association is excited to be a part of Hockey Heritage Week,” KOHA operations director Frank Noonan said. “Having just celebrated our association’s 50th Anniversary, allowing KOHA players and families the opportunity to take part in a weekend so rich with hockey tradition is truly an honor.”

Later on the same day, the Walleye and K-Wings will square off once again, this time wearing ‘futuristic’ CCM jerseys, created exclusively for Hockey Heritage Week.