There wasn’t any scoring in the first period of the Minnesota Wild vs. Montreal Canadiens game last night. Max Pacioretty changed all that in the second, however. The former University of Michigan standout scored three unanswered goals – yes, a natural hat trick – by the 13:36 mark of the middle frame to give his Canadiens a commanding 3-0 lead. They were Pacioretty’s third, four and fifth goals of the season; he has only played in 13 games this year due to injuries.  When he’s healthy, the former Wolverine is a force for the Habs – something the people of Hockeytown will have to keep an eye on moving forward, as well.

Our list of Michigan names on NHL opening night rosters 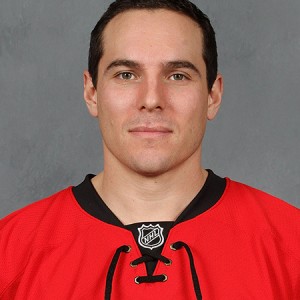 The Calgary Flames picked up a 5-4 shootout win over the Winnipeg Jets last night, and they got a helping hand from Mike Cammalleri. The former University of Michigan star scored the game’s opening goal, and he added an assist later on. Cammalleri’s goal was his latest demonstration of his puck and shooting skills; the Wolverines alum caught a cross-crease feed, waited a second to fool goaltender Reto Berra, then he lofted a shot past him. It was Cammalleri’s ninth goal of the season, and it started his Flames down a path to victory. Despite only playing in 14 games this season, Cammalleri is 21st in the league in goals. That doesn’t come as a surprise to the Maize and Blue faithful – he scored 65 goals in his three NCAA seasons.

Michi-gamer: Pride of the Mitten (Week of Nov. 11)

Our list of Michigan names on NHL opening night rosters

Former Ferris State captain Kyle Bonis is just beginning his professional hockey career, but he doesn’t seem to be having many growing pains thus far. Bonis scored twice in his Florida Everblades’ Friday night road win over the Gwinnett Gladiators, helping his ECHL squad to a 3-0 victory. Bonis, who recorded 77 points in his four-year stay in Big Rapids, now has nine goals and four assists for 13 points in 12 games. He is also +6 with 34 shots on goal. The Traverse City North Stars alum (NAHL) is under a two-way contract with the Charlotte Checkers of the AHL right now, and has dressed in one AHL contest. Last year, Bonis played in six AHL games with the Norfolk Admirals after the conclusion of his NCAA career.