Welcome to another season of MiHockey’s Michi-gamer, now powered by Bauer Hockey.

Every night, we’ll keep an eye on those players, and every morning, we will pick one Michi-gamer of the night – one Michigan player who stood out above the rest.

We just got done looking through some recent USHL scores, and were pleasantly surprised to see Davey Middleton’s name pop up. The Novi native is currently the captain of the Cedar Rapids RoughRiders, and on Wednesday night he picked up a goal and an assist – factoring into both of his team’s goals in a 5-2 loss to Omaha. Through 32 games, the Catholic Central alum has nine goals and eight assists, along with 31 penalty minutes. His play in the USHL circuit caught the attention of college scouts, and Middleton will be playing for Brown University when it’s time to move on from the junior ranks. We’re excited to see what could happen after that, for a player that CC coach Todd Johnson said was a “late bloomer” in high school. 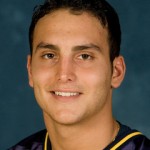 Louie Caporusso picked the right time to score last night. The former Wolverines star found the back of the net at the 19:24 mark of the third period in his ECHL contest against the Kalamazoo Wings to break a 1-1 tie, and lead his Elmira Jackals to a Wednesday night victory. It was Caporusso’s 11th goal of the season; the Michigan alum now has 30 points in 31 games. Last year, his first as a professional player, the four-year Wolverine had 16 goals and 16 assists in 29 games. He has also cracked the Binghamton Senators’ line-up for 13 games in 2011-12, and three this season. Expect him to have more opportunities with the Ottawa Senators’ AHL affiliate once all the post-lockout roster moves sort themselves out. 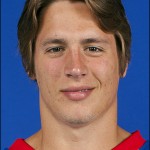 After helping his Connecticut Whale to a 6-1 win last night over the Portland Pirates, JT Miller is our Michi-gamer for Jan. 16. The 19-year-old former US NTDP standout tallied the third Whale goal to give his team an insurance marker. In 29 games this season, Miller has recorded six goals and nine assists for 15 points. Drafted by the New York Rangers 15th overall in 2011, Miller was also part of the gold medal-winning USA U-18 squad in 2011, where he was the top scorer with 13 points in six games. Prior to joining the Whale, Miller spent his time with another type of ‘Whale’, this one in the OHL with Plymouth. There, he registered 25 goals and 62 points in 61 games during his only OHL campaign.

Team USA’s players to watch at the World Juniors

With limited action to pick from last night, we took a second look at this weekend’s games, and Brandon Saad’s performances stood out. The former Saginaw Spirit star had a goal and three assists on Friday against the Grand Rapids Griffins, leading his Rockford IceHogs to a 5-2 win. Saad followed that performance up by setting up the game-tying goal and scoring the game-winning goal Saturday, once again leading his team to a win, this time against Milwaukee. Saad, a Pittsburgh native and Blackhawks prospect, now has eight goals and 12 assists in his first 31 professional games. 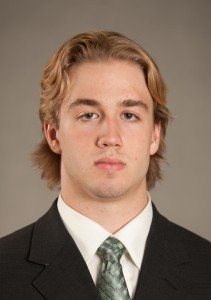 After stopping 65 of 67 shots in Michigan State’s weekend series against No. 2/3 Notre Dame, Jake Hildebrand gets our first Michi-gamer nod of the week. The freshman from Butler, Penn. continued his outstanding play between the pipes for the Spartans this weekend, as he is quickly establishing himself in our ‘adopted’ Michi-gamer category. Finally, the offense came and Hildebrand earned his fourth win of the year to help comprise a 4-8-2 record. In those eight losses, MSU has only scored five goals. And with a 1.86 GAA and .940 save percentage, it’s evident Hildebrand has done everything he humanly could to keep the Spartans in every game.

One thought on “Michi-gamer: Pride of the Mitten (Week of Jan. 14)”